Billbug grub injury is most common on new lawns, particularly those established with sod. White grubs are the most damaging insects in Colorado lawns, and include masked chafers, May and June beetles, and Japanese beetles. Unlike other white grubs, Japanese beetles are also a terrible pest in their adult stage. 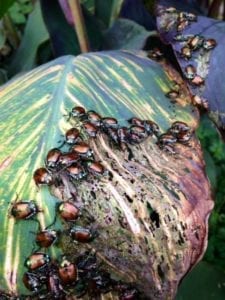 Japanese beetles are fairly new to Colorado and have started to invade areas of Denver as well as Littleton, Centennial and south into Pueblo. They are extremely destructive, non-native, nasty bugs that can quickly decimate ornamental flowers and foliage, and can cause turf dieback. They feast on American linden, apple, apricot, cherry, peach, and plum, birch, crabapple, Japanese maple, Norway maple, pin oak, grapes, tropical hibiscus and canna, beloved roses and many more garden favorites. Adult Japanese beetles emerge from turf areas usually in late June into July.

Which means NOW is the time to treat your lawn to kill the larvae. Apply grub control products, then apply controls again in the summer during the egg-laying period. Look for a product that is labeled for Japanese beetle grubs (larvae). We recommend using a combination of controls — a multi-part attack– to reduce numbers. We carry:

Previous Post: « Microgreens and Sprouts – March 22, 2017
Next Post: Welcome to crazy spring weather once again, Colorado … Brace yourselves, and your plants! »

Talk Plants with Us!